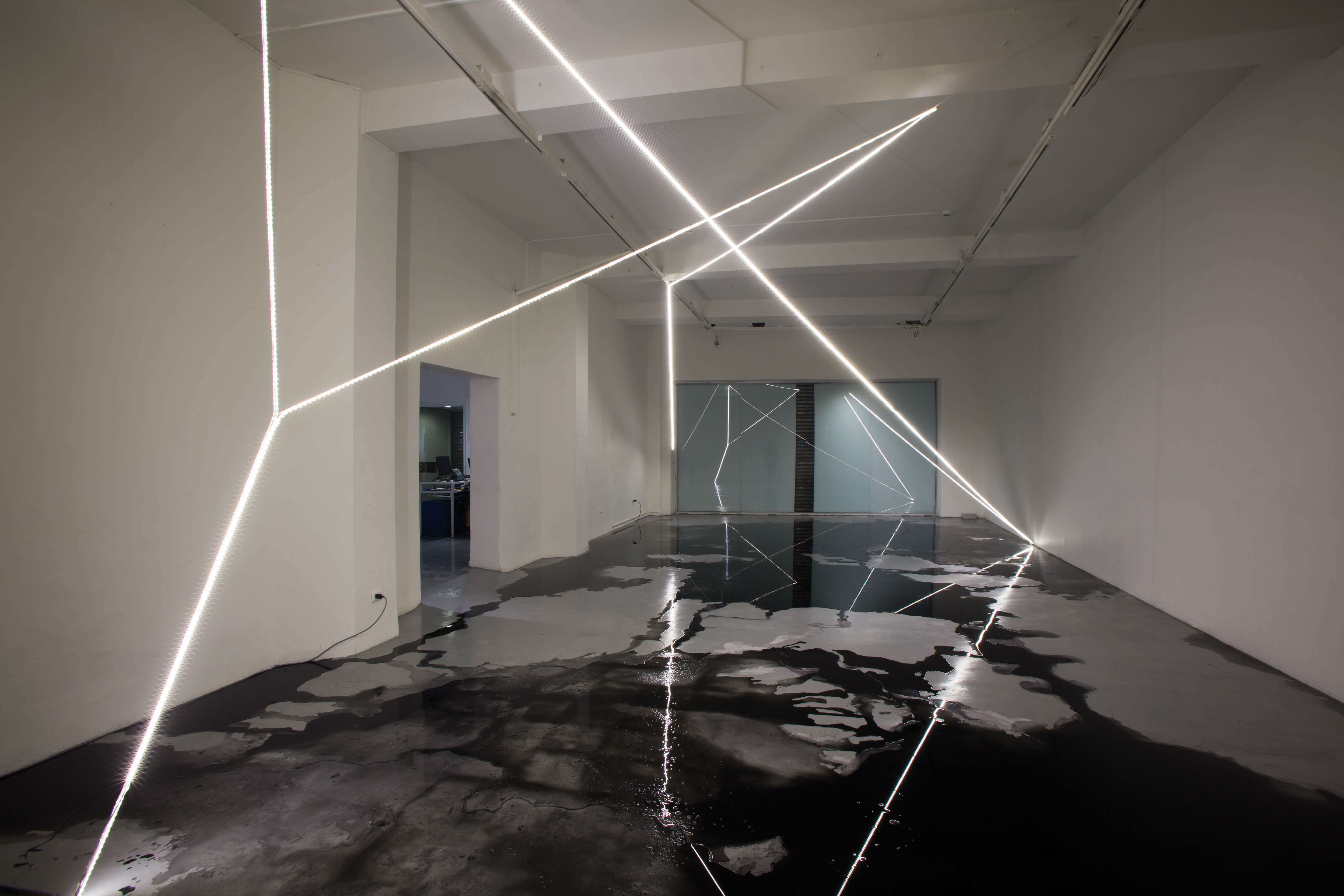 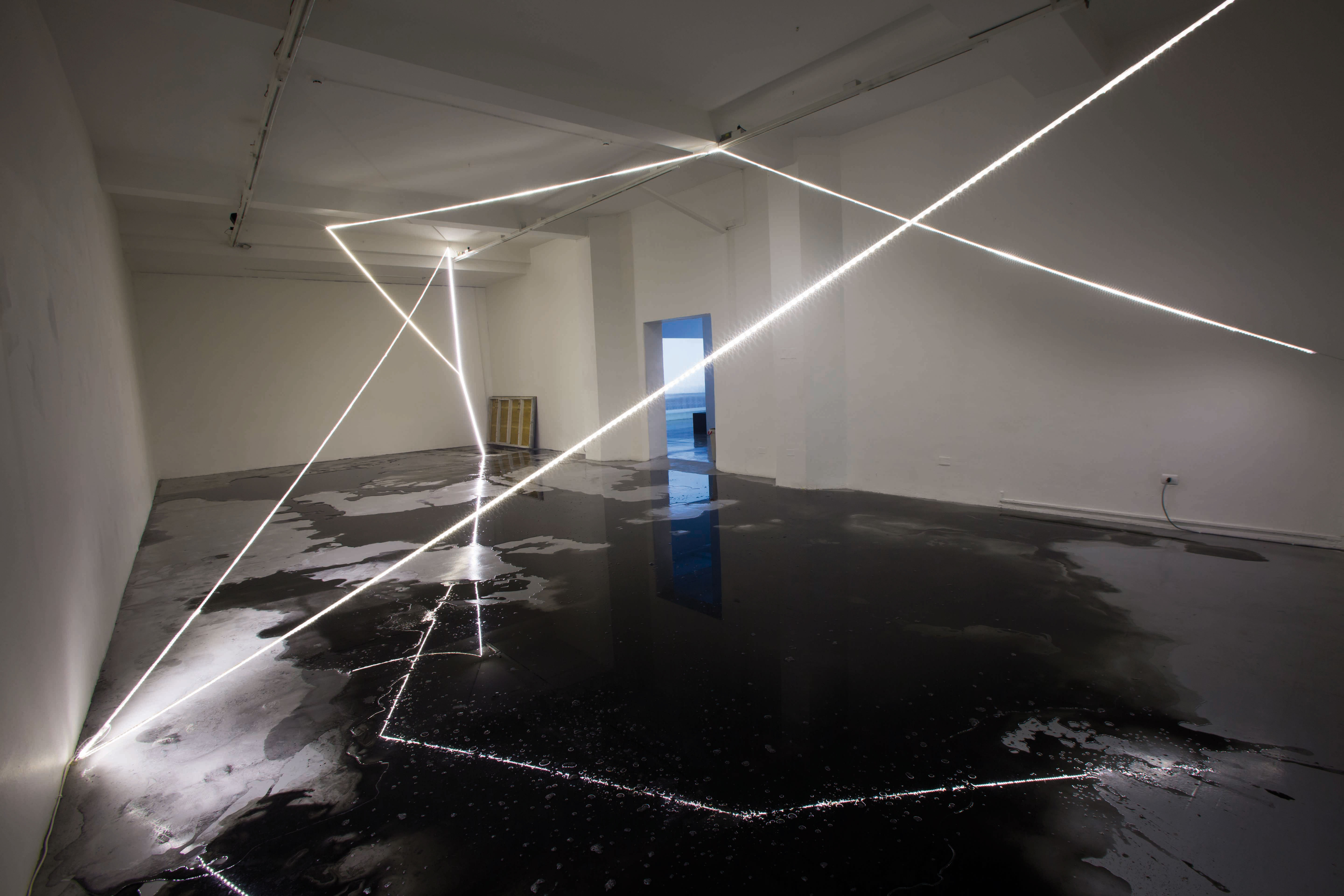 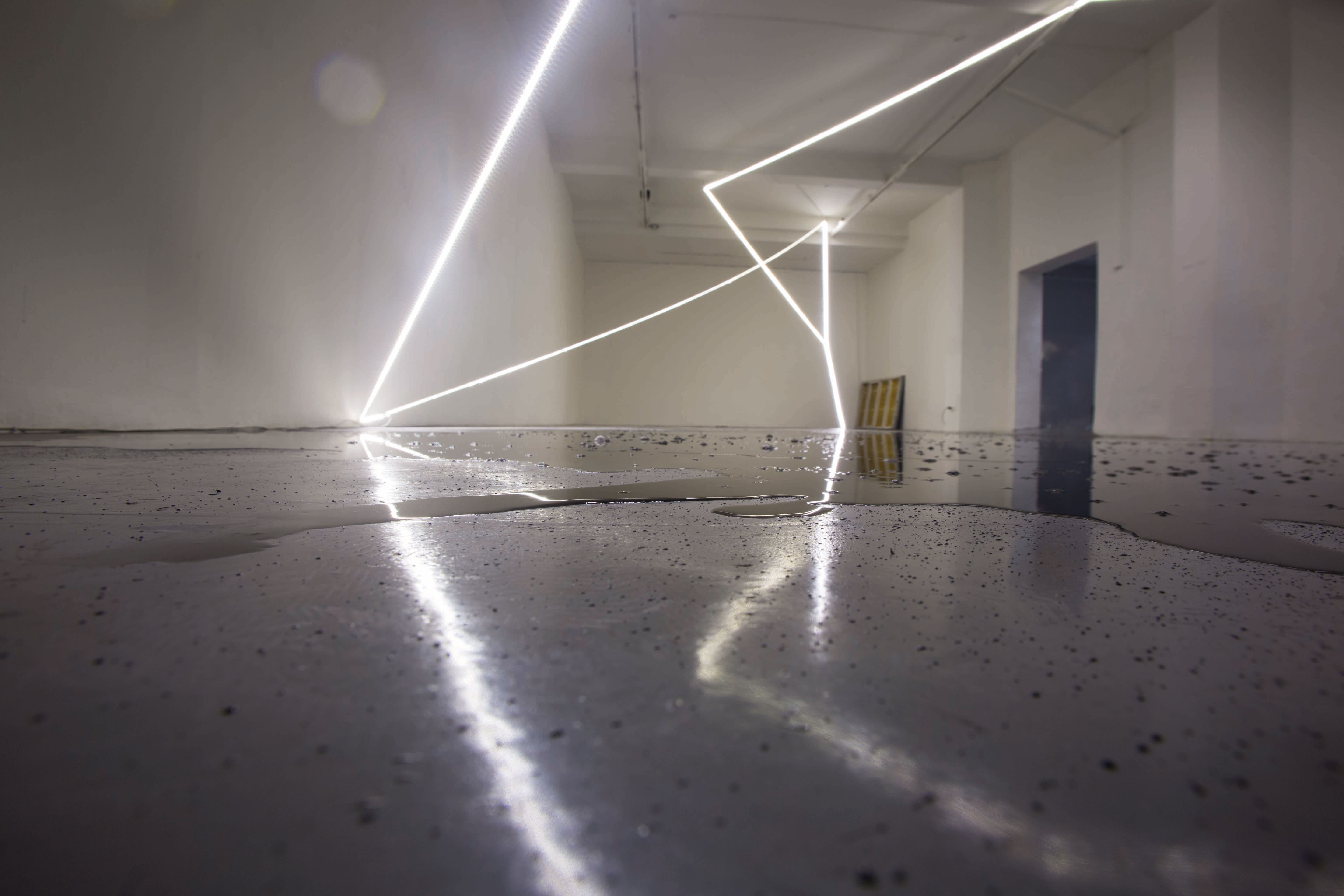 At the end of 2014, David Scognamiglio* presented his newest research about the relationship between public and private spaces, called “Constellation”. The work was presented in two parts: a public intervention and a private installation.

To carry out his installations and projects the architect and artist David Scognamiglio used flexible strips Linear Flex® by Grupo MCI.

The project started in Ciudad de los Valles, an urban microsystem located in the outskirts of Santiago de Chile, in which 2,000 families live in a closed and homogeneous way. Scognamiglio went to this “city” to perform a public lighting intervention in the street and evaluate the reaction of the citizens. So what happened? “Nothing, the interest of the people that walked close to the lighting installations was nonexistent,” commented Juan José Santos, art critic by the University of Valladolid, journalist by the University SEK and with a master degree in “Specialist in Critical Art”, by the Universidad Complutense de Madrid.

Lack of interest? No interest about public interventions? Perhaps the situation of wanting to live in a space away from the city is related to the refusal to interact in public space and instead perceiving them as something negative?

Filming the reactions, the video was projected at Gabriela Mistral Gallery, together with the lighting installations made of light lines reflected thought the water. This installation invites the viewers to connect with the universe in the middle of the traffic and tempo of the urban lifestyle.

David Scognamiglio said: “I am investigating about the constellations concept in several application fields like: astronomical, temporal, psychological, visual, etc. The majority of the reflections are already specified on the installation. In this exhibition, the point of view of the constellation is emotional and relational “.

THROUGH THE INSTALLATION AND INTERVENTION

INSTALLATION: GABRIELA MISTRAL GALLERY
This installation wants to create emotional spaces of light and shadow, establishing a connection of the participant with the universe and itself. The main goal of the installation is to set up an intimate space which takes you away from hectic lifestyle and transport you to a spiritual stage.

In the main space of the gallery a system of light lines invades the atmosphere, such a spider web, creating geometric light figures, as a constellation.

On the ground, pools of black water reactivate the vision of light generating a second visual layer as a projection underneath our feet.

Here the light, celestial element, immaterial, belonging to another reality, lies with the water, elements of emotions, connection and nature.

INTERVENTION: CIUDAD DE LOS VALLES
The second work consisted to recreate the same concept of the first installation, but in specific urban context: at Ciudad de los Valles, a private urbanization with public spaces on the outskirts of Santiago de Chile. This intervention was filmed and projected in Gabriela Mistral Gallery.

This intervention was conceived in two units: the urban intervention itself, characterized by a system of light lines, similar to the installation in the gallery, and the video documenting the performance.

In other words, the experiment aims to expand reflections in the cities: the interior space in which we can concentrate, relax, protect, and outdoor spaces where the frenetic lifestyle causes us stress and discomfort.

* Architect and artist David Scognamiglio is a student of Università degli studi di Firenze in Italy. Through his work, he explores the power of matter as a narrative object and space as a container of emotions. In particular his research involves two basic dimensions: the integration of the spectator/participant within the work, and the emotional trace that the work leaves lingering on the viewer/participant. Most of his works are site-specific installations.
Scognamiglioa presented his work in Italy, France, United States and Chile, and collaborate with many artists and groups (Stalker, Consuline, Urban Exploration, etc). In October 2014 he participated in the contemporary art festival Nuit Blanche in Paris, an absolute success. He also forms part of the collective CAC (Contemporary Architecture Centre). David Scognamiglio lives and works in Santiago de Chile and Bologna, Italy, and we hope that very soon we can see him presenting his work in Spain.